There are many ways to ask about racial and ethnic identities or origins. The choices that Hispanics make to describe their racial or ethnic identity can vary depending on how the question is asked and who is asking it.

For U.S. Hispanics, racial and ethnic identity can have many dimensions. Nearly two decades of Pew Research Center surveys of Hispanics show some identify most often with the country of origin of their ancestors, such as indicating they are Mexican, Dominican or Cuban or even American. Others choose pan-ethnic identities like Hispanic, Latino or even Latinx.

For others, their Hispanic identity is part of their racial identity. Others may indicate they have a Hispanic ancestor, yet they do not self-identify as Hispanic. Across all these findings, a consistent pattern emerges: The more generations removed someone is from their family’s immigrant roots, the less likely they are to identify with the origins of their immigrant ancestors, or even to identify as Hispanic.

Hispanics and their race and ethnicity

There are many ways to ask about racial and ethnic identities or origins. The choices that Hispanics make to describe their racial or ethnic identity can vary depending on how the question is asked and who is asking it.

The open-end approach to asking about race and ethnicity

In an open-ended question asking respondents to describe their race or ethnicity, 11% of U.S. adults mentioned an origin with roots in Latin America or Spain. These responses included pan-ethnic terms like Hispanic, Latino and (less commonly) Latinx. They also included references to countries, like Mexico or the Dominican Republic. 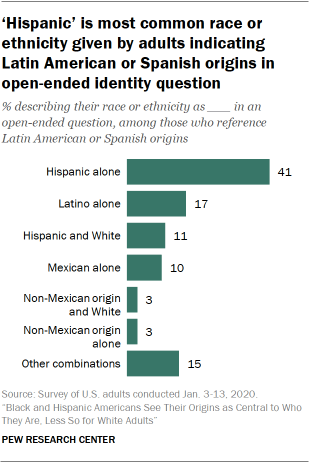 Among these adults, the single most common response was Hispanic. Some 41% described their identity this way with no mention of other origins or backgrounds. Another 17% wrote Latino but with no mention of other identities or origins; 11% described their race or ethnicity as “Hispanic and White,” and 10% wrote Mexican as their race or ethnicity with no other origin mentioned. These responses in total accounted for about eight-in-ten (79%) of open-ended answers given by adults who indicated an origin in Spanish-speaking Latin America or Spain.

The 2020 decennial census approach to asking about race and ethnicity

Among Hispanics, matches and mismatches in responses about race and ethnicity

Because the survey asked about race and ethnicity in two ways, it is possible to compare responses to the open-ended question with those of the closed-ended Census Bureau two-step question.

According to the survey, responses to the two methods for asking about race and ethnicity did not always match. Some 53% of self-identified Hispanics (based on the 2020 census Hispanic question) gave an answer in the open-ended question about race and ethnicity that matched what they indicated in the two-step closed-ended decennial census question, among those who gave valid answers to both questions. However, for 47%, there was not a complete match.

One possible reason for this mismatch of responses is the instruction in the Census Bureau’s race question – for the purposes of this question, Hispanic origins are not races. Survey respondents may have been following those instructions, resulting in different responses in the race and ethnicity open-end question and the Census Bureau’s two-question race and ethnicity format.

The Bookshelf: You Won’t Always Hear This, But Immigration and Trade are Renewing Communities

The 2016 Presidential Election—Identities, Class, And Culture