California has urged all residents, even those who are fully vaccinated, to wear masks indoors while in public, and is requiring them in K-12 schools, governors of Texas and Florida, on the other hand, have largely banned schools and municipal governments from instituting such mandates.

Despite a significant surge in both coronavirus cases and hospitalizations this summer, California so far has managed to avoid the sky-high infection rates and increasingly overcrowded hospitals some other states are now experiencing.

California’s coronavirus case rate remains below the national average and significantly less than that of Florida and Texas: two common points of comparison given their population size and distinctly different pandemic responses.

While governors in Florida, Texas and other states have opposed allowing local governments to mandate the wearing of masks, California has allowed counties to enact such orders in indoor public spaces for everyone age 2 and older, regardless of vaccination status.

“I am hopeful for California and Los Angeles, because of the fact that we have higher levels of vaccination, and we have increased numbers of people stepping up to the plate and getting vaccinated,” said Dr. Robert Kim-Farley, medical epidemiologist and infectious diseases expert at the UCLA Fielding School of Public Health. “However, we still have a ways to go to achieve a higher level of community immunity, or herd immunity, because of the increased transmissibility of the Delta variant.”

California is reporting 141.1 new coronavirus cases for every 100,000 residents over the last seven days — a rate half that of Texas, 297.8; and less than one-fourth that of Florida’s rate of 653.8, according to data from the U.S. Centers for Disease Control and Prevention. California’s rate is also less than the national average of 232.1.

By contrast, California is reporting 772 new COVID-19 hospital admissions daily, just 32% of its winter peak of 2,380. On a per capita basis, Florida’s rate of new daily hospitalizations is five times worse than California’s. 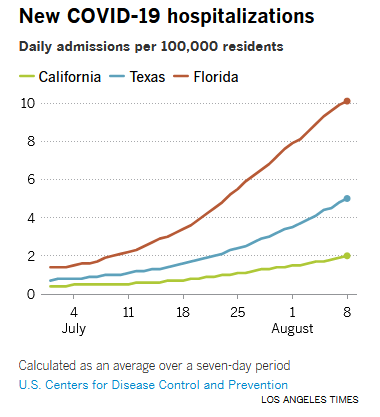 There are also some signs that California’s Delta surge is slowing after public officials in many counties instituted universal masking in indoor public settings. Some businesses have also started demanding proof of vaccination as a condition of employment or entry.

During the week that ended Sunday, L.A. County reported a total of 20,979 new coronavirus cases — a modest 6.5% increase from the previous week, Public Health Director Barbara Ferrer said Tuesday. By comparison, the county saw a 22% increase the week before.

Over the same timeframe, the rest of California reported 55,422 total cases, a 20% increase from the week before. The week before that, the increase was 57%. 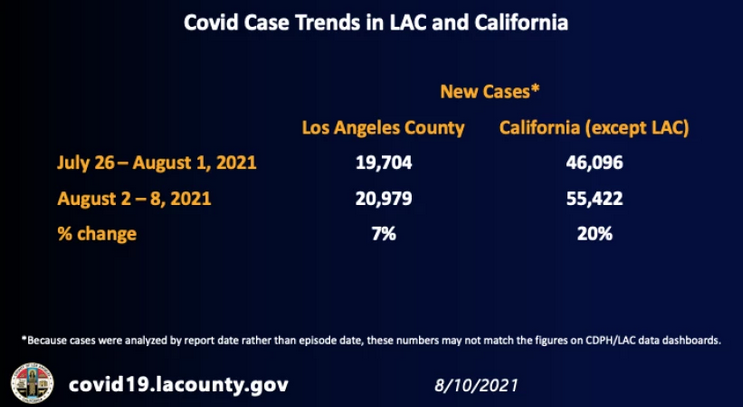 L.A. County this summer was one of the first local governments in the nation to recommend, and then require, the wearing of masks in indoor public settings — a move that was soon followed by others including Sacramento and Santa Barbara counties and much of the San Francisco Bay Area.

“Data from around the world and from our county have repeatedly shown that masking is a valuable layer of protection against transmission of respiratory viruses,” Ferrer said.

Officials stressed the Delta variant continues to be a public health threat, and they expect cases to rise further in the coming weeks. Yet they hope the steps already taken will flatten, and eventually reverse, the pandemic’s trajectory without resorting to more stringent measures.

The biggest reason for that optimism is California’s relatively robust level of vaccine coverage. According to the latest CDC figures, 77.5% of eligible Californians — those who are at least 12 years old — have already gotten at least one dose, and about 63% are considered fully vaccinated.

In Florida, roughly 69% of similarly aged residents are at least partially vaccinated, and 57% have completed their inoculation series. The comparable rates in Texas are 64.3% and 53.7%, respectively, federal figures show.

Officials and experts say the overwhelming majority of people currently being hospitalized for COVID-19 in California and across the country have yet to be vaccinated.

Out of 117 people admitted to Los Angeles County’s public hospitals primarily for COVID-19 between June 15 and Aug. 5, 112 were not fully vaccinated and only five were fully vaccinated, according to Dr. Christina Ghaly, the county’s director of health services.

Aside from vaccines, health officials and experts have long noted that pandemic conditions vary based on a number of factors. Some areas may have stricter coronavirus-related rules in place, or are home to residents who — for whatever reason — are more likely to take individual precautions in their daily lives.

Other areas may largely scoff at any such limitations.

Perhaps nowhere is the gap between California versus Florida and Texas more apparent than when it comes to masks.

California has urged all residents, even those who are fully vaccinated, to wear masks indoors while in public, and is requiring them in K-12 schools.

The governors of Texas and Florida, on the other hand, have largely banned schools and municipal governments from instituting such mandates, though some local leaders have defied those orders.

In light of the surge, Texas Gov. Greg Abbott has directed the state health department to use staffing agencies to find additional medical staff and also sent a letter to the Texas Hospital Assn. requesting that hospitals postpone elective medical procedures.

Austin, Texas, emergency room doctor Natasha Kathuria — a native of Orlando, Fla. — said she hears from Florida doctors that the situation there is even worse, and worries that’s where Texas is headed. She’s already had to send patients home because she didn’t have the capacity to treat them.

“This is disaster medicine,” she said. “We’ve never felt this disheartened during the pandemic.” 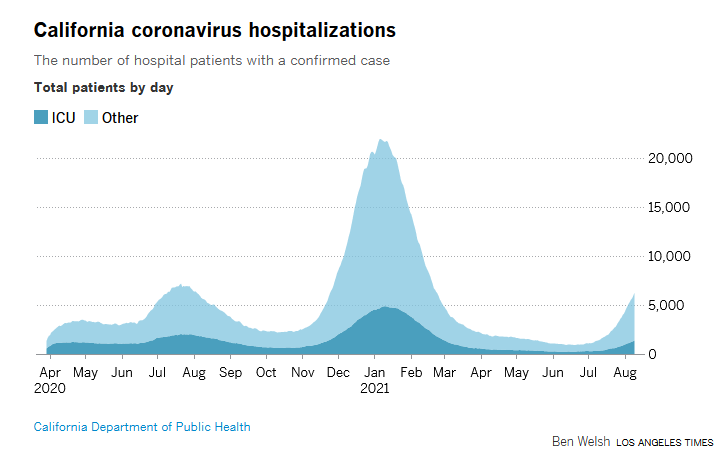 Though California officials have voiced some concern with rapidly rising hospitalizations, they’ve generally said they believe the state’s healthcare system won’t come under the same sort of stress as during the state’s devastating fall-and-winter wave.

Though the surge of new infections has started to wash over California’s hospitals, the death toll from COVID-19 has remained relatively low at an average of about 32 fatalities per day over the last week. That’s a far cry from the regular triple-digit counts seen during previous surges.

Though it’s possible death counts may not surge as they have earlier in the pandemic — especially since many of the most vulnerable Californians, namely the elderly and those with underlying health conditions, have gotten vaccinated — Ferrer cautioned that it’s still too soon to say for sure.

In L.A. County, she said, someone who dies from COVID-19 was diagnosed an average of 37 days beforehand.

“With our case increase having begun relatively recently, it’s therefore too early to fully assess the impact of this latest wave of infection,” she said. 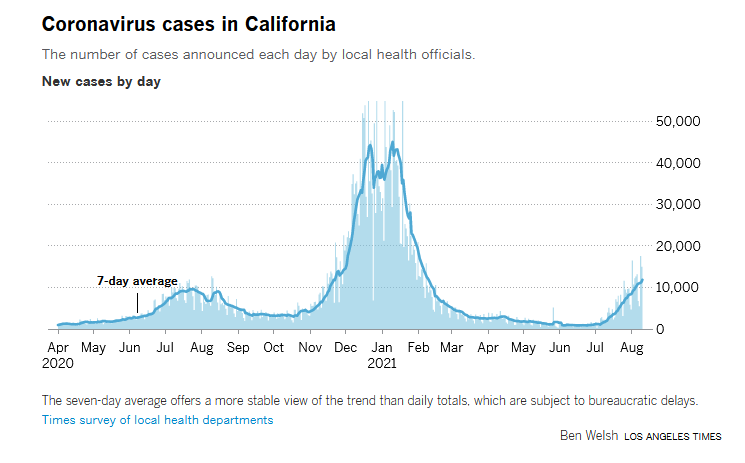 The lessons of El Paso

With or without masks, immigration and border security rally the Texas Republican base